The Nuvla services and their dependent services are all containerised and can be deployed easily into a CaaS (e.g. Docker Swarm cluster).

For production, we recommend to split the deployment of Nuvla stateless and supporting stateful services. Such deployment provides a much more resilient service.

Warning: do not run a commercial service based on these instructions. In this case, we strongly recommend you get in touch with the SixSq team.

The Nuvla services and their dependent services are all containerised and can be deployed easily into a Docker Swarm cluster. The deployment has been split into two groups to facilitate the management of the services:

A graphical overview of the Nuvla deployment can be seen below (on the right).

Before starting, review the entire deployment procedure. The nuvla/deployment GitHub repository contains files that will help you deploy Nuvla.

Review the requirements for the host Docker Swarm cluster that you will use to deploy Nuvla. These can be found in the Docker Swarm Infrastructures section. In particular, be sure that you have created the “traefik-public” network and that Traefik has been deployed.

Once you have deployed a basic Docker Swarm cluster, you might want to add a few optional services to improve the service and provide additional functionality.

Once you have deployed a basic Docker Swarm cluster, you might want to add a few optional services to improve the service and provide additional functionality, such as:

But before we get to these services, let’s review some firewall rules we need to enable these optional services.

For Target infrastructure for user containers infrastructures, the Nuvla service must be able to access the services on the cluster. The site’s firewall rules must be setup to allow inbound access to the Docker Swarm API and to the HTTP(S) ports for other services, e.g. Minio S3. The nodes in the cluster must also be able to communicate between themselves.

In addition, you will want to allow users to access applications that they’ve deployed on the infrastructure. To do this, make sure that inbound access is possible for all ephemeral ports from anywhere (or at least from all IPs addresses of your users). The range of ephemeral ports can be configured via the kernel parameter /proc/sys/net/ipv4/ip_local_port_range.

The following table shows the ports to open for target infrastructures:

A Nuvla micro-service host infrastructure has fewer ports that need to be opened, as Nuvla is generally the only publicly accessible service on the system.

The following table shows the ports to open for host infrastructures:

NOTE: If you used Docker Machine to deploy your cluster on a cloud, the driver will likely have created a security group. You can modify this security group, if necessary to expose non-Docker ports, e.g. the ephemeral ports for applications.

The various components (both Nuvla components and other required components) will use an “external” network when making services available outside of the Docker Swarm cluster.

Create a public overlay network by running the following command on the master node of the Swarm cluster:

NOTE: For debugging purposes, you may want to add the --attachable option when creating the network. This allows you to start containers on the network and directly access the services there. Generally, you should not use this option in production.

Traefik is a general router and load balancer. Clone the nuvla/deployment repository to the master node of your Docker Swarm cluster.

There are two versions of the traefik deployment: traefik and traefik-prod. Here we will use the first, suitable for test or demonstration deployments, using a self-signed certificate for connections to the HTTPS (443) port. Feel free to explore the second one on your own.

To deploy an infrastructure for test or demonstration purposes, use the traefik configuration that uses self-signed certificates. You can find this in the swarm/traefik subdirectory of the repository.

To deploy traefik do the following on the master node of the cluster:

This will generate temporary, self-signed certificates and bring up traefik. You can view the current configuration of traefik at the URL http://

Having an overview of the activity on the Docker Swarm cluster is very helpful in understanding the overall load and for diagnosing any problems that arise. We recommend using Prometheus to monitor the cluster.

To deploy Prometheus with the standard configuration (from a cloned version of the nuvla/deployment repository), run the command on the Swarm master:

The service will be available at the URL https://<master-ip>/prometheus. The following services will appear:

Normally, you will only be interested in the Grafana dashboard, which provides a visual overview of the Swarm cluster operation.

To allow for user data “objects” to be accessed via POSIX from within containers (see Emma - Data Specialist on how to use this feature), the nodes of the Docker Swarm cluster hosting user container must have NFS installed. This is optional, but strongly recommended.

This can be done, for example on Ubuntu, by accessing the nodes as root via SSH and running the command:

(Note: this actually installs the server as well; easier than just installing the client alone.)

If you use one of the Swarm nodes (e.g. the master) as the NFS server, be sure that the NFS daemon is installed there.

On the NFS server, create the directory that will be shared with all nodes of the Swarm cluster. The commands to do this on Ubuntu are:

Note that this configuration allows any node within the cluster to mount the volumes. If the network is open to nodes outside the cluster, you may want to provide an explicit list of allowed hosts.

The Nuvla data management services (see Emma - Data Specialist on how to use this feature) rely on the availability of an S3-compatible service on the Docker Swarm Nuvla uses to host the user containers.

Minio is a container-based implementation that can expose NFS volumes via the S3 protocol. To deploy Minio, run the following commands (from a cloned version of the nuvla/deployment repository):

The service will be available at the URL https://<master-ip>/minio/. (Be patient, minio takes a minute or so to start and then traefik must adjust its configuration.) The default username/password will be admin/admin, if you’ve not changed them in the configuration.

The Nuvla services and their dependencies communicate over a network that is not accessible publicly. Because this is shared between separate deployments, it must be created manually.

Create the private, backend overlay network by running the following command on the master node of the Swarm cluster:

Verify that the network has been properly created by using docker network ls.

Nuvla uses Elasticsearch to store the vast majority of its state, including all the stored documents that represent resources in the system. Zookeeper stores the remaining state, which consists of the states of asynchronous jobs in the system.

Before trying to deploy Nuvla’s core services, first start the database elements. To do so, clone the nuvla/deployment repository on the Docker Swarm master.

Navigate to the “prod/db” directory in your checked out repository. There you execute the command:

Verify that the Elasticsearch and Zookeeper services come up correctly, by listing them with Docker (docker service ls) or by inspecting the logs.

Once the database services have been deployed, you can then deploy the core services for Nuvla. In your clone of the nuvla/deployment repository, navigate to the “prod/core” directory. To do so, execute the commands:

Verify that all of the services start by listing them with Docker.

You should also verify that the API server has fully started by inspecting the logs:

After the configuration messages, the log should indicate that a server has been started on port 8200. Once this is the case, you can visit https://

Similarly, you can verify that the web browser interface is available by visiting https://

If you have used the default password for the “super” (administrator) account, you should change it before providing access to other users. From the Nuvla welcome page, click the login button, fill in the form with the administrator credentials, and click “login”.

If you have successfully logged in, the button in the upper, right corner should have the administrator’s username “super” as the label. When you click on the button, you will see the profile page, which contains a button to reset your password.

For the user registration and invitation features to work, the Nuvla server must have access to an SMTP server to send emails. To provide this configuration, open the “api” section, select “configuration” resources, click on “search”, and then you should see the “nuvla” configuration resource in the results. 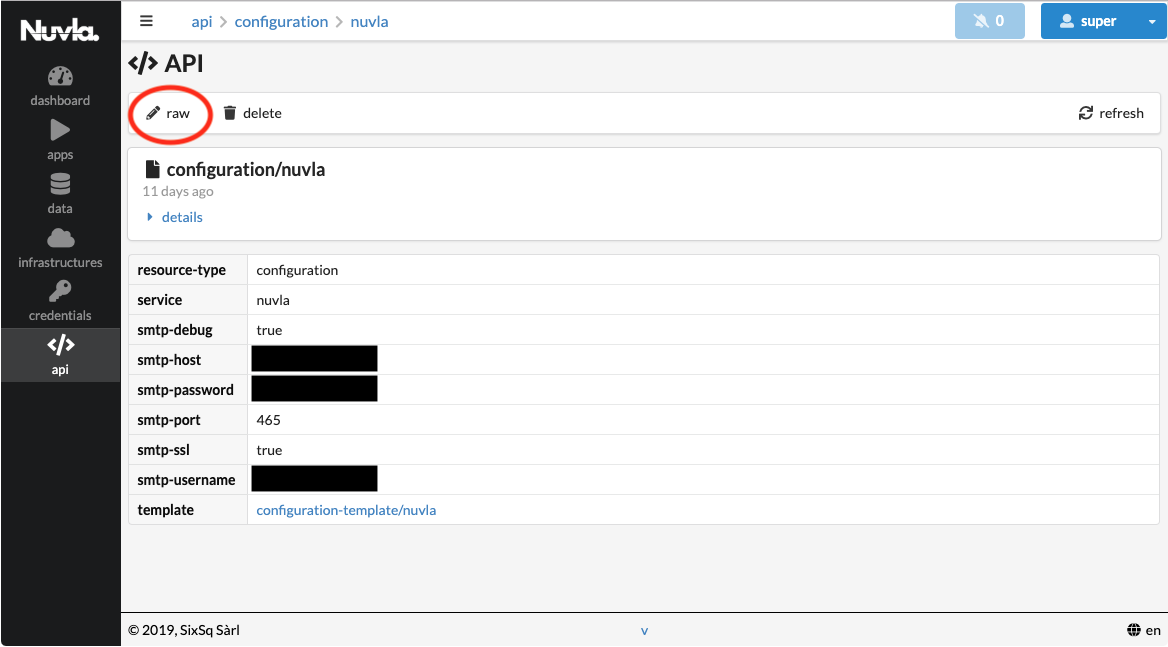 To provide the SMTP values, click on “raw” and edit the JSON source directly. 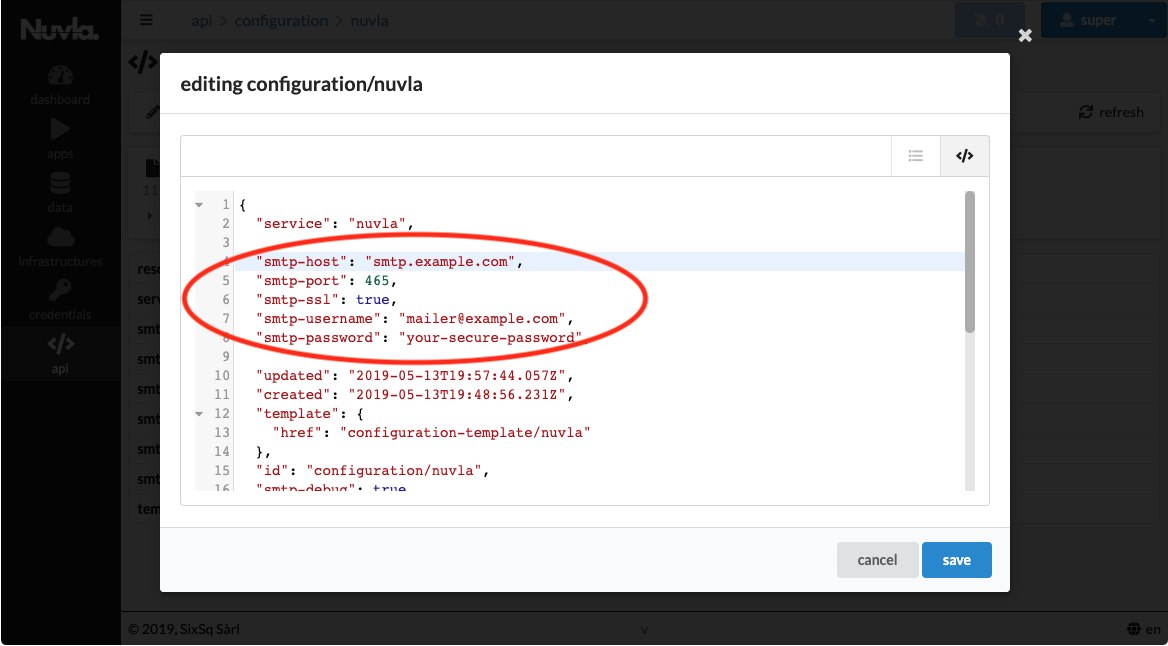 If successful, you should see the new values on the refreshed details page.